It’s a week now since the Australian Blogging Conference in Brisbane and in the intervening time there have been quite a few blog posts about the event.

It was, it seems, not so much live-blogged as post-blogged.

Although I had fantasies of doing some live blogging of the event I did not get to post about it till a couple of days later, on my Thinking Home Business site.

Nick Hodge’s “rough notes” on the business and corporate blogging session, for which Nick, Joanne Jacobs and I were discussion leaders

Joanne Jacobs who has several posts on the conference

David Jacobson’s notes on the business and corporate blogging session

Yaro Starak’s notes on the day

(Update: I neglected to mention that, in a comment on that post on Thinking Home Business, Bronwen Zande gave us a link to a post with her impressions of the event)

Today I’ve gone through all my Google Alerts for the conference and the listings under “blogoz” at Bloglines, to find posts I had not mentioned or discovered previously. The following is my best take on what was available up to about mid-afternoon today.

Journalist Derek Barry at Woolly Days has an extended post on the opening session, and going by the timestamp he near as live blogged it.

Senator Andrew Bartlett, the blogging politician, comments on the opening session, in which he participated, and has some thoughtful observations on the role of politically-focused blogging in Australia.

Barry Saunders at investigative blog has videos of the general session kicking off the day, the citizen journalism session and the session led by Dan Walsh and Peter Black on the future of blogging.

Pete Newsome at Brisbane SEO Blog was pleased to see he wasn’t the only search professional there and has a detailed rundown of the events of the day. 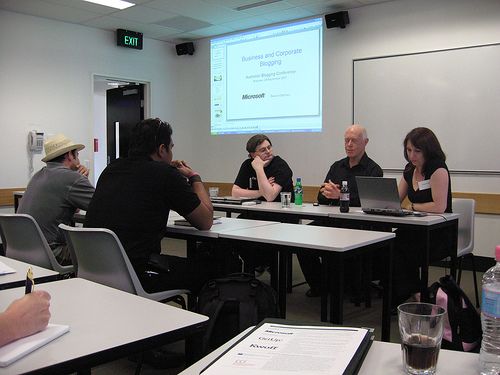 Pic courtesy of Nick Hodge under a Creative Commons licence

Mark Bahnisch of Larvatus Prodeo has detailed notes of the talk he gave on political blogging and he links to Derek Barry’s just-mentioned post (see above) for notes on the discussion.

Search engine marketing wiz Christine Parfitt at Semfire has some good things to say about the conference generally and a detailed summary of the session on business and corporate blogging.

I was particularly interested in blogging policies and codes of conduct, the last question listed by the panel. Nick talked about the evolution of the Microsoft policy and how there is strong support for the latest version within the company. We were provided with a link to the TheNewPR Wiki with very rich resources on blogging policies and related information.

Suzie Cheel enjoyed the event, not least for the opportunity to get to know other bloggers better.

Duncan Riley says Australian Blogging Conference Was a Hit and hopes next time he won’t be forced to have to choose between sessions competing for his attention. His on word verdict on the networking (and let’s face it, Duncan has probably done more blogging conferences than most of us) – “kickass”.

Kate Davis brought her librarian classifying and documenting skills to bear, and apparently very speedy keyboard skills, to produce a detailed and helpful record of the Duncan Riley/Yaro Starak session on building a better blog.

Tama Leaver, coordinator of the Blogging and Education session, for whom the event was “a fabulous, stimulating and intellectually rich conference” has an extensive post which includes notes from his own session and a battery of links to posts elsewhere (so if I’ve missed yours here, it may well be linked in Tama’s post).

Ben Kraal is also interested in the blogging in education issues and promises to post more on the discussion on these.

I suspect that the medal for Most Prolific Blogger of the event should go to Gold Coast librarian Peta Hopkins at INNOVATE, who has detailed notes on the opening session and on the the Blogging and Education session – the issues are summarised and deserving of closer attention by anyone interested in education.

Peta also has notes on the Creative Commons session and dot point notes from the session I led with Yaro on promoting your blog.

…we had some very interesting and robust discussion – focused around the YouDecide project – about citizen journalism, what counts as citizenship, and – my own particular interest – strategies for engaging citizens who are not ‘political junkies’ but who may be very actively engaged in local or interest-based issues.

Blogging to help others improve their life and to raise collective consciousness was a concept I heard repeatedly voiced over the day.

It was very interesting for me, having today gone over this batch of posts, to see how positive so many people had been about the conference. Where were the knockers? The “cut down the tall poppies” brigade? The cultural cringers? Was there another conference on for the grumps that day?

Not that everyone thought it was all smoochy koochy.

Matthew Smith who writes thoughtfully and with quiet passion on religion and other matters at Bogosity was not sure that this was the conference for him:

During the conference I couldn’t help feeling like I wasn’t meant to be there because a lot of the focus was on high readership blogs that have a brand and fulfill a purpose.

I’ve read a couple of times the post On things maturing…maybe on the Home Cooked Theory blog and I can’t figure out whether the author enjoyed the conference or didn’t.

But as I say, the overall impression from reading the various blog posts is that people found the conference stimulating, enjoyable and helpful. Not least because of the connections made or enhanced during the day and at the after conference drinks.

And comparing my experience of other conferences, it seems to me that from this event of some 100-120 people (I’ve heard different estimates) there is a much higher proportion of people actually making contact now – whether via blog post comments, or becoming a Twitter follower or by email. And it’s not “networking by numbers” either, but genuine, sharing connections.

Not least the initiative by Duncan Macleod to get a Gold Coast bloggers group moving via Meetup.

If I have missed a post by anyone, please let me know in the comments.

Footnote: I don’t know whether James Farmer would claim his 2005 BlogTalk Downunder event as the first Australian blogging conference, but his initiative needs to be part of the record. The event last week in Brisbane was the first to go by the name of Australian Blogging Conference although the recommended/agreed tag is blogoz.