I can remember a time not so long ago when LinkedIn executives and staff were really good about responding to questions and even criticism. Co-founder and sometime VP at LinkedIn Konstantin Guericke used to put an enormous effort into communicating with members on LinkedIn-related groups of which I’ve been a member, including the one of which I’m a moderator, LinkedIn Bloggers. Mario Sundar, whose current title at LinkedIn is Community Evangelist, was another who would respond quickly and thoughtfully.

Seems like those days are gone. At least if my experience and that of a couple of my colleagues is anything to go by.

What prompted these reflections and this post was a message yesterday on Twitter (a “tweet”) by @jowyang, a.k.a. Senior Analyst, Social Computing at Forrester Research, Jeremiah Owyang, drawing attention to LinkedIn’s latest coup in hooking up with CNBC, “enabling users to share and discuss news with their professional networks”.

I commented with my own tweet: great to see LinkedIn making high level deals – pity their staff don’t feel any need to respond to emails any more.

I hadn’t intended to start a discussion. Just venting, sounding off, as I had recently had a personal experience of what others had told me about not getting responses to communications with LinkedIn.

But Jeremiah replied to my tweet with another of his, as follows: my friend @mariosundar is the Community Manager at LinkedIn, have you talked to him.

That’s when it got tricky.

Because the direct answer would have been, Erm, no, I haven’t talked to Mario, Jeremiah, but interesting that you should mention him because he’s one of the people who hasn’t replied to emails.

Now I do recognize that emails can go astray.

But I had emailed Mario because I had not had a reply from Kay Luo, Senior Director of Corporate Communications and Buzz Marketing at LinkedIn, whom I had emailed at the suggestion of my colleague Bill Vick, about an issue which he and I thought would have been of interest to LinkedIn.

So I’m talking about two emails, one to Kay Luo and one to Mario Sundar.

This was a month ago. No response, not even a form acknowledgement, from either.

A couple of people have encouraged me to blog about the situation. I was reluctant at first, but on reflection I decided maybe by airing the problem there was a chance, slim perhaps but nevertheless a chance, that LinkedIn could lift its game in the member relations department.

Bear in mind I had not emailed LinkedIn as a newbie member asking some question that could have been resolved by checking out the LinkedIn web site. Although I believe that there should be a system in place for even the newest newbie to get some form of response, even an automatically generated one. 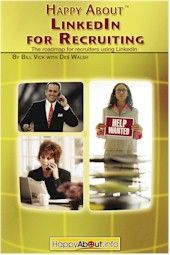 No, what I was writing about was to get official clarification about the different kinds of membership LinkedIn offers, so that the update of the book LinkedIn for Recruiting, of which I am co-author with Bill Vick, could be as accurate as possible.

Why did I need clarification? Because the LinkedIn web site is simply confusing on the subject of types of membership.

In the original, current edition of LinkedIn for Recruiting, which was exhaustively vetted (more than once) by LinkedIn, we listed four types of membership:

Working on the update, I found on the LinkedIn site a chart for comparing account types,  which compares Business, Business Plus and Corporate Services (the last-mentioned did not exist at the time the book was published originally : 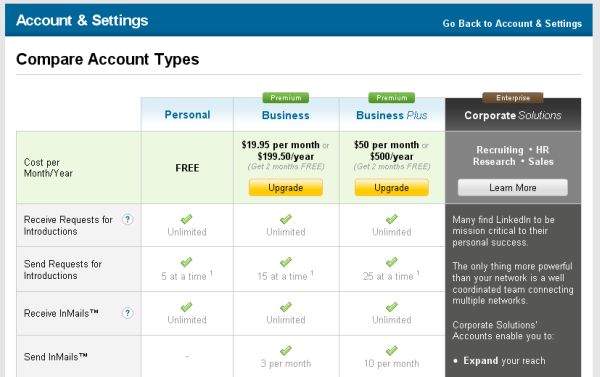 So what had happened to the Pro account type?

Well, evidently it had not gone away, because under “Account & Settings” on my Linkedin home page I was able to pull up another chart with membership types, still showing a Pro account as an option. 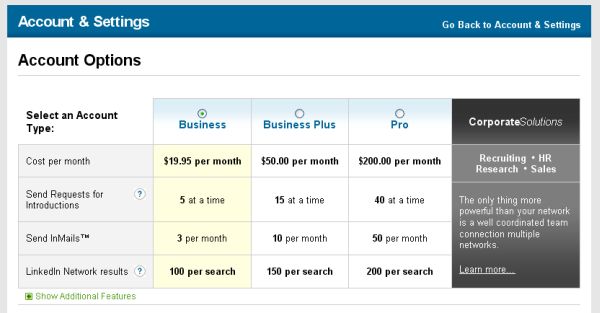 Note also that neither of those tables lists Personal Plus ($60 a year) which I have.

So was this something you think I might have expected at least something along the lines of “thanks for bringing that to our attention, we’ll get back to you soon”? In fact, wasn’t this something that someone would feel concerned enough about to investigate and take some action so as to clear up the apparent anomaly?

You would have thought, wouldn’t you?

Maybe they’ve done something.  But they haven’t told me. Haven’t, as I say, even acknowledged that I wrote.

Not a dicky bird, not a peep.

So is it LinkedIn policy not to reply to emails? Is it that people are just too busy with new mega-deals? Is there something wrong with their email system?

4 thoughts on “Is LinkedIn Too Busy with Big Deals to Respond to Members?”