In the course of a couple of social occasions over the weekend just passed, I found myself endeavoring to explain the social networking platform Twitter and why I found it so interesting. It was a challenge.

Because when you say something like “Well, Twitter is an online social networking platform which allows you to send messages instantly, answering the question ‘what are you doing now?’ and within a limit of 140 characters” it’s probably understandable that some people would not really get why a reasonably sane, reasonably well-adjusted person could find that interesting, at least from a business point of view.

If I’d been near a computer with a live Web connection, I could have pulled up Lee LeFever’s excellent video about Twitter, in the Common Craft Explanations in Plain English series.

But there was no Web connection within reach, so I had to rely on words. With, at best, limited success.

Although I do believe I gave a couple of people food for thought when I mentioned that the very successful footwear company Zappos encourages actively the use of Twitter by its employees.

Thanks to having sat in on a session on creating customer loyalty with social media, at BlogWorld Expo this year, where one of the panelists was Zappos CEO Tony Hsieh, I was able to talk confidently about the fact that all (or most) of Zappos’ 400 plus employees are on Twitter and the company provides training sessions to help with that. There is a Tony Hsieh interview by my friend Stephan Spencer, from earlier in the year, which gives some fascinating information and insight into how Twitter can be used effectively in a corporate context.

Nor is the value proposition for Twitter confined to Zappos and other companies in the corporate sphere. Back in March this year I listed on another site five reasons why, as the owner of a microbusiness, working from home, I find Twitter valuable.

Even on a basic, day to day practical level I have found Twitter amazingly, instantaneously helpful. For example, the other day I was having a challenge getting something to work on my eee PC mini-notebook. A “tweet” about my plight brought instant, practical, effective advice from another Twitterer. Problem solved, productivity restored. 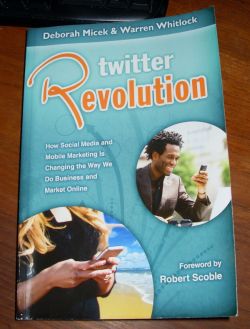 For those intrigued enough to want to know more about Twitter and how it can help their business, a couple of very savvy people, Deborah Micek, a.k.a. CoachDeb and Warren Whitlock, wizard Book Marketing Strategist, have put together a comprehensive guide, Twitter Revolution.

Twitter Revolution is sub-titled “How Social Media and Mobile Marketing is Changing the Way We Do Business and Market Online”.

I have every intention of reviewing the book once I have finished reading it: suffice to say for now, the book is chock full of information and practical advice on how to leverage the power of Twitter for your business.

And if you are new to or even quite unfamiliar with Twitter, you would do well, while you are waiting for Deb and Warren’s book to be delivered, to check out the straightforward introduction to Twitter, written by the aforementioned Tony Hsieh, CEO of Zappos (thanks to Candis Hidalgo for the link).