I Love My eee pc, I Think 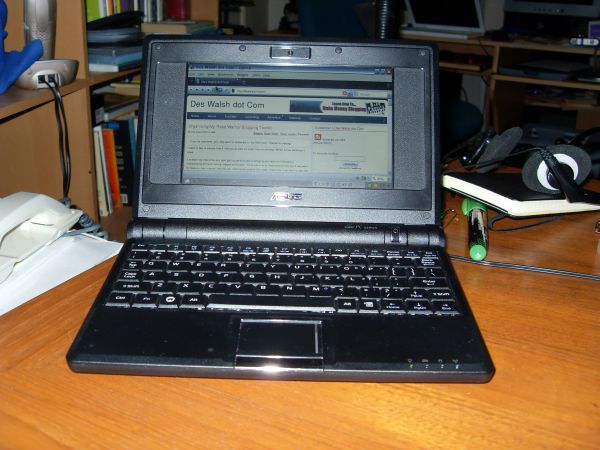 There’s no question I am really pleased to have bought recently a mini notebook computer, the Asus eee pc.

Especially as I prepare to head for BlogWorld & New Media Expo in Las Vegas next week, I love the thought of having a 2 pound (less than 1 kg) notebook to carry and not the 6.28 pound (2.85 kg) Asus A6000 I took last year.

That said, the eee pc has been a bit of a challenge.

First, it’s the Linux version, so as a Windows user I’ve been on a big learning curve about using a new command system.

Yes, I know, there is a Windows XP version of the eee pc. But for better or worse, I’ve got the Linux one.

There is an eee user forum, but a lot of the advice and assistance given seems to assume at least a basic knowledge of Linux. Contributors are helpful but perhaps don’t realise how mysterious some of the instructions can be to someone like me.

Here, for example, is a segment of instructions on how to install the Opera browser – which has a neat function of being able to shrink the display so that you can see more than just the center of a web site:

I don’t want to even think about how many hours it took for me to acquire enough knowledge and go through enough trial and error to enable commands like that to work.

One of the hardest things I’ve had to deal with is to realize that I don’t have access to a number of programs I use as a matter of course on my computer that uses Windows XP.

And with some “solutions” it seems to be one step forward and two steps back. For example, in a previous post I said that discovering the online site Picnik meant I had a solution to the challenge of not having an adequate image editing tool installed.

I’ve just been trying without success to upload some photos  to my Picnik site – nothing serious, just basic screenshots in jpg format, but keep getting *fail* messages – I’m having to re-evaluate my decision that I didn’t need to download, learn and configure something like GIMP.

So far I’ve not been successful in downloading GIMP.

But I don’t intend to give up.