It’s not actually Spring for me, it’s Autumn here, but for most of the people who read this blog it is Spring, traditionally a time to clean house. This post is about applying that thinking to updating our profiles on the social networking site LinkedIn.

The thought was prompted when I was travelling the other day and took advantage of what would otherwise have been airport terminal downtime to re-read, for the first time in a while, the book LinkedIn for Recruiting, which I co-authored with Bill Vick.

We are planning an update soon, so I thought it would be good to see how much work was needed! I was not surprised to discover that there are some web links and a few other points of detail to be updated. Overall, however, and in my humble opinion, the book still stands up well.

The exercise was also a good refresher in some things I could do to make LinkedIn work better for me – and ways I could be using it to help others better.

Importance of an up to date profile

In particular, I was reminded that more than one of the people interviewed for the book emphasized the importance of having a well-constructed, up to date profile. I recall at least one interviewee saying that the one thing people most neglect with LinkedIn is to set up their profile properly. A corollary is that some of us neglect to update our profiles regularly. Yes, some of us. Even though I wrote the book I have been remiss in this – as the old saying goes, the plumber’s house leaks and the cobbler’s children go barefoot. But one of the beauties of your LinkedIn profile is that you can edit it any time, 24/7/365 and as often as you like.

For a good overview of what is involved in setting up or refreshing your LinkedIn profile, no one, as far as I know, has yet improved, for immediacy and clarity, on Guy Kawasaki’s January 2007 blog post LinkedIn Profile Extreme Makeover. This shares, with a detailed screenshot, the advice Guy had received from some very knowledgeable LinkedIn staffers, Kay Luo and Mike Lin, on how to make his LinkedIn profile more useful.

Given that a year has passed, I found it very interesting to compare Guy’s pre-makeover profile with his profile as it is now. It occurred to me that Guy has done us all a huge favor by sharing his profile as it was previously, so we can compare the “before” and “after” versions: I don’t know of anywhere else we could see a comparison like that. The changes might not seem significant to anyone who has not worked on their profile, but the difference is that the profile is now better tuned to do its job of letting people know, more clearly and more immediately, the things Guy wants potential clients, business partners and industry peers to be aware of about him, what he does and his style.

One of the most significant changes is with the Summary. The old version was fairly uninformative (items in bubbles are Kay Luo’s suggestions for improvement):

The new version tells us something in an engaging way and could prompt a prospective client or other interested party to contact Guy. Big difference. The old summary wasn’t wrong: but it was just a few phrases and didn’t tell us much about the man. The current version tells a story. It has content, it shows accomplishment and authority. Importantly, it also has a dash of humor: for me, too many LinkedIn profiles read like an obituary, rather than as depicting a real live person, the sort of person you would be interested to meet and maybe work with or have work for you.

Recently, I mentioned to a colleague that his LinkedIn profile did not really do him justice and was out of date, and suggested it would be in his interest to update it. “Do people read those things?” he asked. Well, yes, they do. Not everyone of course. But a lot of people do. For example, if I’m speaking at a conference I usually try to find the LinkedIn profile of the other speakers beforehand. If someone contacts me about a business proposal, I will typically search for their profile on LinkedIn. More than once I’ve found that people have joined but done nothing with their profile page, so they have missed an opportunity to promote themselves, their brand.

And I know that people check me out on LinkedIn. This past week, for instance. 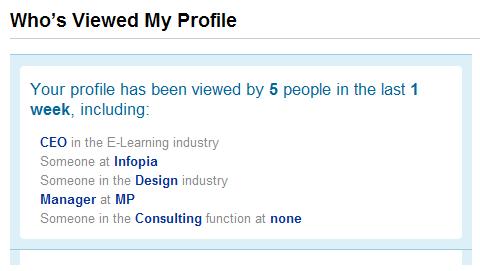 Only five, and I don’t know if any of those visits will produce any business for me, but if there had been some potential and they had not found what they were looking for, just because I had not updated my profile, I know I’d be kicking myself.

Actually, writing that previous paragraph reminded me that I have some new information that I need to add to my profile. So that will be the next port of call after I post this. A bit different from the days when you had a printed brochure and had to wait till you were ready for the next printing!

How’s your LinkedIn profile looking? Time for an update? If you are not sure of your way around the LinkedIn site, there is a great step-by-step post at LinkedIn Life, an “insider’s guide to using LinkedIn”.

Watch for the next post in this short (probably two part, but let’s wait and see) series on spring cleaning your LinkedIn profile.

(Note: March 30, 2009. I realize I did not get to do a Part Two of this, but a year on I have started a series of tips on using LinkedIn)
RSS stuff

You can make sure you see that and future posts by getting the RSS feed for this blog (if “RSS feed” doesn’t mean anything or is confusing, this 3 minute video from master explainer Lee LeFever should do the trick).