Back in March this year, I asked the question “Is Brisbane ready for a Social Media Club?”.

The answer proved to be in the affirmative. We had a preliminary gathering of interested people and then launched Social Media Club Brisbane on July 11th.

I take responsibility for the fact that in the enthusiasm of the moment we did not have an agreed plan for next steps. So until a couple of weeks ago nothing much happened.

Then we were able at short notice to put together an informal meetup at the State Library to get some indication of where we were at and where we were going.

At the same time, so as to facilitate communication, I set up a Social Media Club Brisbane group on Facebook , which has already proved to be very helpful. Without any fanfare, the group there has now grown to 74 and I believe it will at least double once the word gets out and we are having more regular gatherings.

Membership of the group is currently by invitation or with the approval of one of the administrators. We are not being restrictive but, until the details of how we are going to operate are articulated, we need to have it so that people apply or are invited. 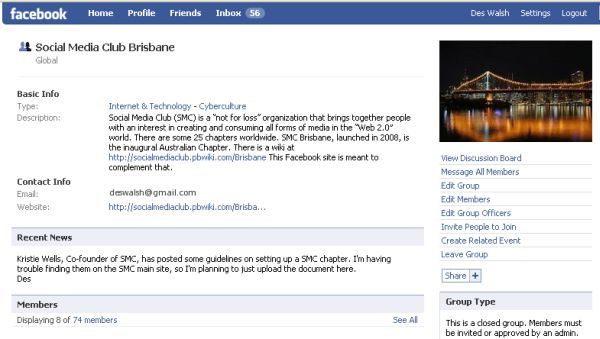 For SMC Brisbane we now have a TWitter hashtag #smcb (go to http://search.twitter.com and enter smcb in the search box).

A computer crash some time ago meant that I lost some of the addresses of people who wanted to be kept informed about the development of SMC Brisbane, so if you or anyone you know is wondering why I haven’t been in touch, that is probably the explanation. Please hook up with us again, either by leaving a message on the Contact page on this site, or applying to join the group on Facebook.